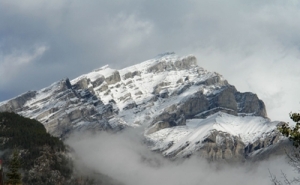 I love rocks. When I was a kid I could spend all day in a gravel driveway collecting specimens, mostly composed of limestone and quartz.  A few times I was certain I had found a secret deposit of gold or silver, but nothing ever panned out (pardon the pun).

When I pick up a rock I don’t just think of what I see, but also how it was created. Some rocks are metamorphic (produced by heat and pressure), and others are sedimentary (produced by pressurized layers of sediment).  Once they are created they can be further transformed by such things as water and ice, and sometimes by man for his purposes. When I find a rock I really like, chances are it is going to be sliced up and hung on a chain.  Yup, I love rocks.

Rocks are found everywhere in the Bible. Moses struck one with a staff to provide water for the children of Israel.  David killed Goliath with one.  And a big rock covered the entrance to the tomb where Jesus was buried.

But there was one rock of a different kind.  His name was Simon until Jesus made him a rock.  Simon’s brother Andrew brought him to meet Jesus.  That’s where he was turned into rock.  Well, actually, he didn’t become a rock, as in a piece of granite or sandstone.  Instead, He started his journey as a key leader in the early church, and the one who would proclaim the “keys to the kingdom” (the gospel) on the Day of Pentecost.  Jesus once told him, “You are Peter (which means Rock), and on this rock ” (again, the gospel) I will build my church (Matthew 16:18).

I am not sure what kind of rock Peter was most like. He wasn’t a sedimentary rock because He didn’t sit still long enough to build up sediment.  He might have been metamorphic since he was a pressure cooker when things didn’t go as he thought they should.  In the final analysis, perhaps we should just call him a gem since he was so valuable to God’s plan.  Peter truly was a geological wonder, of the spiritual kind.

While Peter might have been an important leader in the early church he wasn’t the only one with the “keys to the kingdom”. Did you know if we are followers of Jesus we have the keys too?  In fact, we are chips off the old block!  Ok, so Jesus didn’t call us rocks, but Jesus is the Rock, and we are His ambassadors to the world.

Jesus once talked about two kinds of builders (Matthew 7:24-25). The foolish builder builds on the sand and the rains wash his work away.  The wise builder builds on the rock and his life stands firm.  The “rock” in Jesus’ teaching here is the truth He delivered to the world.  We build our lives on Jesus, and everything He said and did.  He is our Rock.  Nothing else can stand up under the pressure this world dishes out.

I guess one could say Peter was a rock built upon The Rock. His name probably reflected the personality and leadership potential Jesus saw in him.  But his steadfastness would stand as a testimony to the Rock of his salvation.  Only the rock-solid grace of Jesus could resurrect Peter from his disastrous behavior during Jesus’ trial and crucifixion, and use him so mightily in His kingdom.

There is one thing we have in common with Peter. He went through periods of doubt when he didn’t feel much like a rock.  You might remember his stroll on the Sea of Galilee where he lost his focus and almost drowned.  And his actions during the hours when Jesus needed him most were inexcusable.  But Jesus refused to give up on Peter.  He knew what He could become, and when the Rock picks you out of the driveway, you just have to let Him have his way.

What do you believe God sees in you? Where do you believe the Lord Jesus wants to use you in His kingdom?  You are a wonder, you know!  You hold the key to someone else’s salvation.  And Jesus is still building His church through all of us, as we share Him with others.