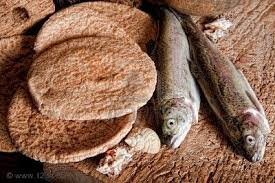 Recently, a 13 year-old California boy received school detention for sharing a chicken burrito with a friend. For those of us who grew up exchanging peanut butter and jelly sandwiches for tater tots, this sentence sounds insane.  But in a day when so many children seem to be suffering from severe allergies, no school wants to be sued for negligence.  So keep your burrito to yourself!  It could be more deadly than you think.

When I was a young minister the church camp in our area was blessed with food donations from local farmers. Other camps had hot dogs and grilled cheese.  Our kids ate steak and fresh vegetables.  Then the government raided our operation and shut us down.  Ok, so maybe it wasn’t that dramatic, but they did say all of our food had to be inspected and approved.  This brought our home-grown meal plan to a grinding halt.

All of this makes me wonder what would have happened today if one of Jesus’ disciples had tried to feed a crowd of over five-thousand people (John 5:1-13). Back then the disciple who rounded up the food was Andrew, the source was a “boy” and the fare was five loaves and two fish.  Was the fish fresh?  Were the conditions sanitary?  Where did all of those people go to the bathroom?  And what would an inspector put on his form for the food source, minus the five loaves and two fish: “The hand of Jesus?”

Consider the boy. He is rather obscure, but his actions are so typical of the kind of people God wants in His kingdom.  He has been the subject of much speculation.  Some say his mother allowed him to go hear Jesus that day and fixed him a lunch so he wouldn’t go hungry.  Others think he may have been carrying the family meal.  If this was the case he might have had some “splanin’” to do when his parents found out their food was gone.  We really don’t know why this boy was there, or why he was carrying what was apparently the only sustenance in a mob of thousands.  We do know he gave what he had to Andrew, and Jesus used it to feed the multitudes.

My personal opinion is whatever circumstances brought the boy and his food to Jesus’ seminar that day, the whole thing was orchestrated by God. God provided the smallest meal imaginable to highlight one of the most amazing miracles possible.  Not only did He feed over five-thousand people (assuming only the men in the crowd were counted), but there were twelve baskets of bread left over.  All of this was possible because a boy surrendered his lunch to a disciple named Andrew.

The most obvious lesson we learn from this account is how Jesus takes the smallest contributions in our lives and uses them for big purposes.  We may not be the personal recipients of these purposes, although I am sure the boy who gave up his meal also ate well.  But we have the opportunity to watch God multiply our resources for His glory.

But there are other lessons. For example, it took a lot of trust for this boy to give up all he had, just because Jesus needed it.  What if Andrew merely needed to feed Jesus and the boy was forced to do without?  Certainly there are many occasions in our lives when we have to trust Jesus needs what we have more than we do.

We also need to be willing to make sacrifices with no expectation of fame or fortune.  Indeed, this boy did become very famous, but we don’t know his name.  There is no indication Jesus had him come before the crowd of five-thousand so they could applaud his generosity.  He didn’t get a letter with a small bronze lapel pen that said, “I gave it all.”  The boy might have become a home-town hero, but in general he slipped into anonymity.  In the same way, as long as Jesus is lifted high, we shouldn’t worry if people forget our investment.  It never hurts to thank others for the good they do, but in the kingdom we always care more about what God does with what we give Him than we do the gift.

I have wondered if I would have been as generous with my lunch that day. Maybe I would have hid my food basket behind my back when I heard Andrew combing through the crowd in search of food.  It takes faith to let go of what we want so God can give others what they need.  But when we do, we are blessed.  What would you do if Andrew asked you?